I recently shot a series of images for a local community college’s annual report. One of the more interesting—and fun—images to shoot was a dramatic portrait of a member of the women’s basketball team. 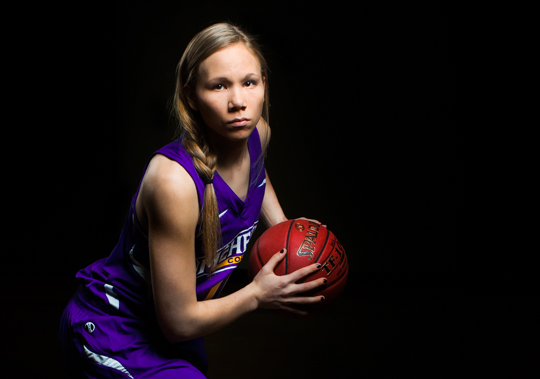 The goal was to produce a portrait that displayed determination, empowerment and strength: all attributes of the athletics program, this particular athlete, and the college overall.

As I planned for the shoot, I wanted strong lighting to create drama. Since the athlete was a woman, I didn’t want the lighting to be too harsh. My first inclination was to use a beauty dish as my main light.

After a few test shots, the beauty dish wasn’t giving me the look I wanted. The shadows were too harsh and I wasn’t getting good catch lights in the eyes; a critical detail I was watching for knowing that the portrait would get its own full page in the report.

I ended up using a 32” soft box with egg crate grid on the main light for maximum control and minimal spread. Then, opposite my main light, I used a gridded strip box kicker light to add highlight and separation between the athlete and the background.

Originally, I dragged out a third light in case I needed it but decided against it. You can see it in the photos, but in the end, the final photo used a two-light setup. 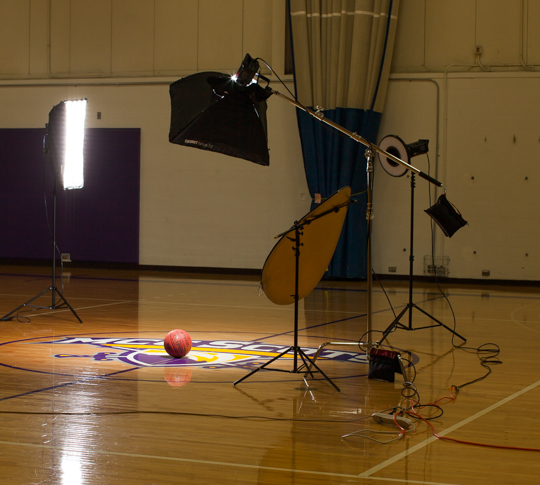 Using two controlled light sources allowed me to define the contours of the hair and the athlete’s arm muscles while keeping the face, body and floor properly lit. Initially, I used a silver reflector to bounce light into the shadowed area of her face at camera left, but it added too much light. I ended up removing it to keep the shadows, which added to the drama.

The main light was set at f/11, while the kicker behind was about f/8. I tweaked the kicker light several times as the athlete changed position. I wanted to make sure I had just enough highlight and separation without getting too much wrap-around effect.

I changed the athlete’s position several times, trying to see what I liked best. Once we took the final frame, we knew we had it.

As you can see from the BTS video, the set didn’t change too much, and I ended up not using the beauty dish at all. (And I’m lucky I caught that boom before my light went down!)

The gym I was shooting in was very bright and the floor was understandably reflective, so I had to burn in the background in Photoshop to make it go completely black.

Other than that, I fixed a few blemishes and adjusted temperature, contrast and sharpening. I also desaturated all the white lettering on the floor to remove the yellow/green color cast that was present.

Overall, I’m happy with the results and so is the college. 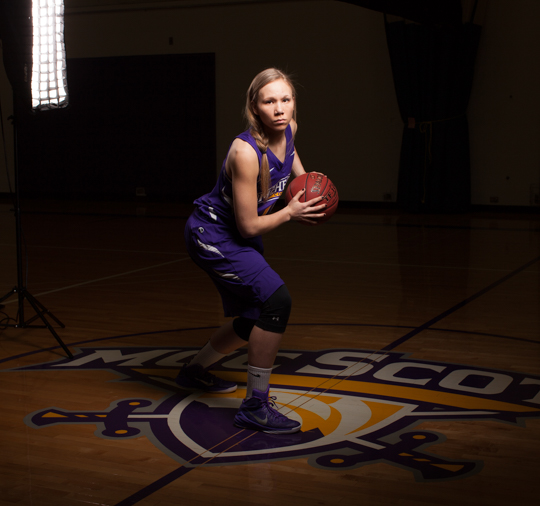 Straight out of the camera 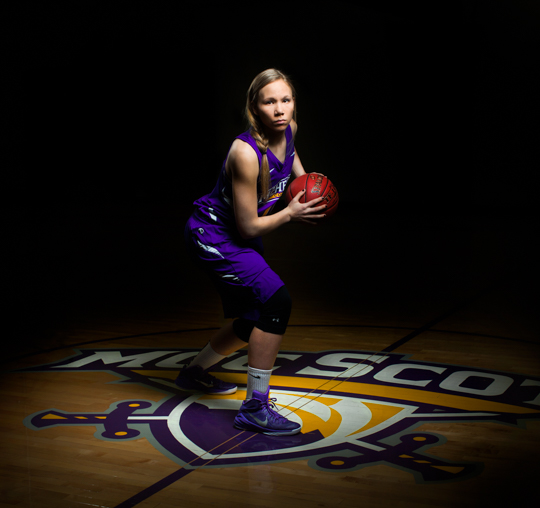 All photos were shot with a Canon 5D Mark II and 24-105mm f/4 lens. Lighting was two Calumet Travelite 750 heads triggered with PocketWizard Plus IIs. Time-lapse video shot with an iPad.