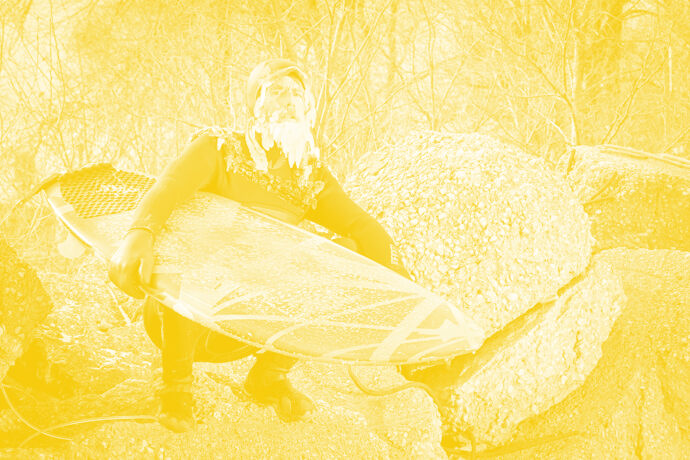 “My next passion project is going to be roadkill.”

This is how he concludes the discussion. It’s par for the course.

Mike Calabro—known as “Mr. Awesome” to his clients—has photographed all over the world for major magazines. Adventure is the existence that he knows, and action stories are the ones he’s best at telling. But Mike has an addiction: surfing.

In the Midwest. In the winter.

Mike was able to sit down in between shoots to talk with Nick Foreman over at XEQUALS headquarters about a photo that has has its own little story to it.

You love suffering, don’t you Mike?

Yeah, I kinda do.

Surfing On A Lake? Who Does That?!

“I’ll go super far back real quick. As a kid, I knew you could do it [surfing] on the lakes, because driving up Lake Shore Drive with divorced parents from Indiana to Illinois every weekend, I would stare out the car window and see guys surfing. 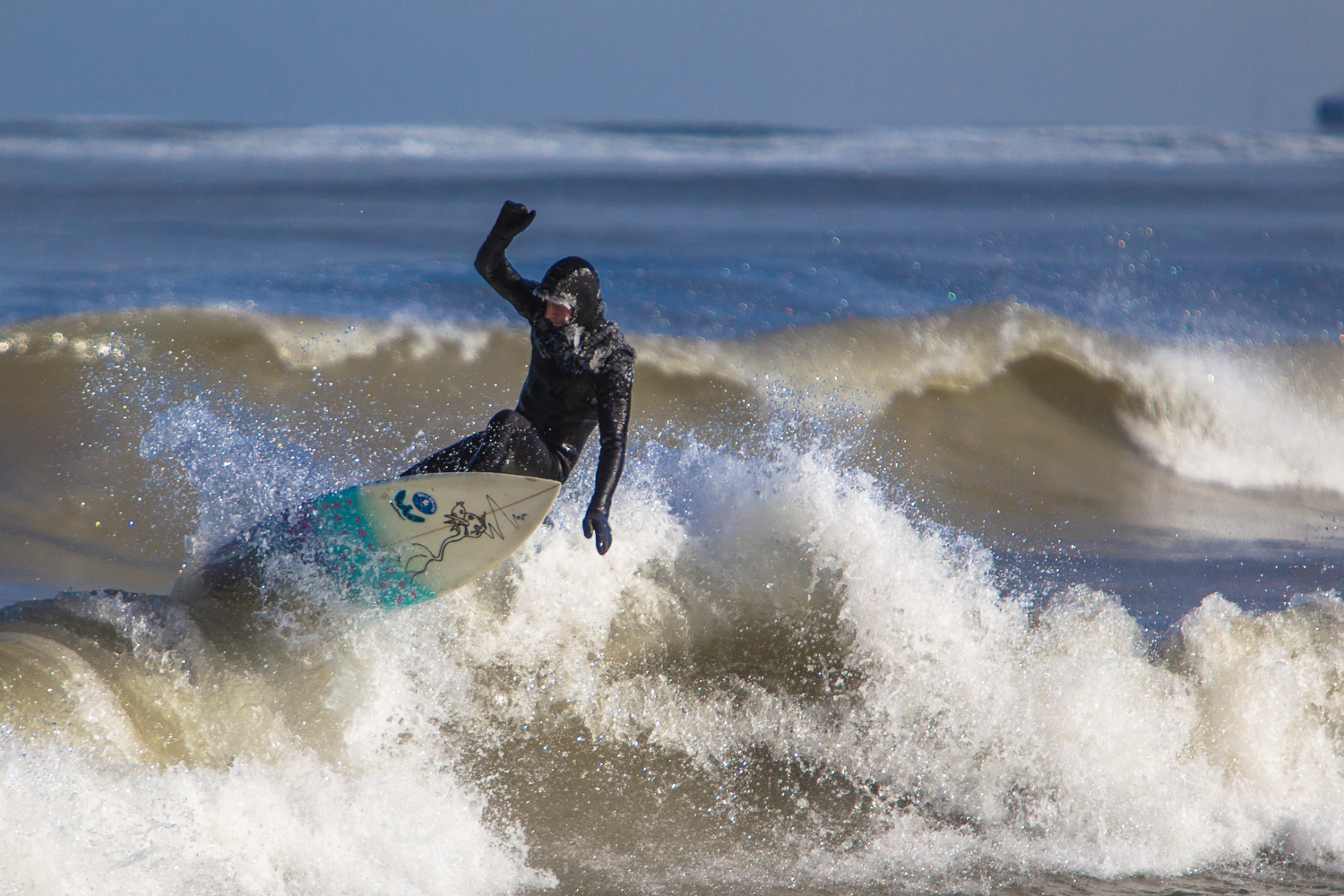 I was always into board sports. I had a skate ‘shop’ that shared part of my mom’s store [she owned and operated a boat shop in Whiting, IN]. Her business was doing bad, and I started in, like, 7th grade. I started super small; I took a corner of it and, near the end, I had more than half the shop and was paying all the bills.

Around that time, someone gave me a surfboard—way too small for me. I would take my scooter out to Lake Michigan during the winter and try to surf when the winds were heavy. I had no clue what I was doing. I wore an old Jacque Cousteau-esque 7mm scuba diving suit that made me feel like I was in A Christmas Story. You know, when that kid wears way too many clothes and he couldn’t move.

A professional can’t give excuses about why he didn’t get the shot.

On The Culture Of Surfing:

If you want to get great images of an action culture like that, you can’t just show up and start taking photos like a creep. In other words, you’ve gotta know what you’re talking about?

There are just some spots where you don’t belong. I was surfing a spot in Puerto Rico a few weeks ago, and the locals told me some guy got shot there the week before. Some new guy with no etiquette at a highly localized surf spot.

But we don’t have the whole localism bull$#!^ that most other places around the world have. I shoot what I know, and that’s why I’m allowed to do it. It’s something I love and a culture that I understand. I know the language, and it’s something I fit into.

What About This Photo Right Here?

“So, the photo in question—that day it was maybe, like, 10°F out. And the cool thing about [surfing on] the lakes is you get these ice beards that you don’t get in saltwater because the lakes are freshwater. 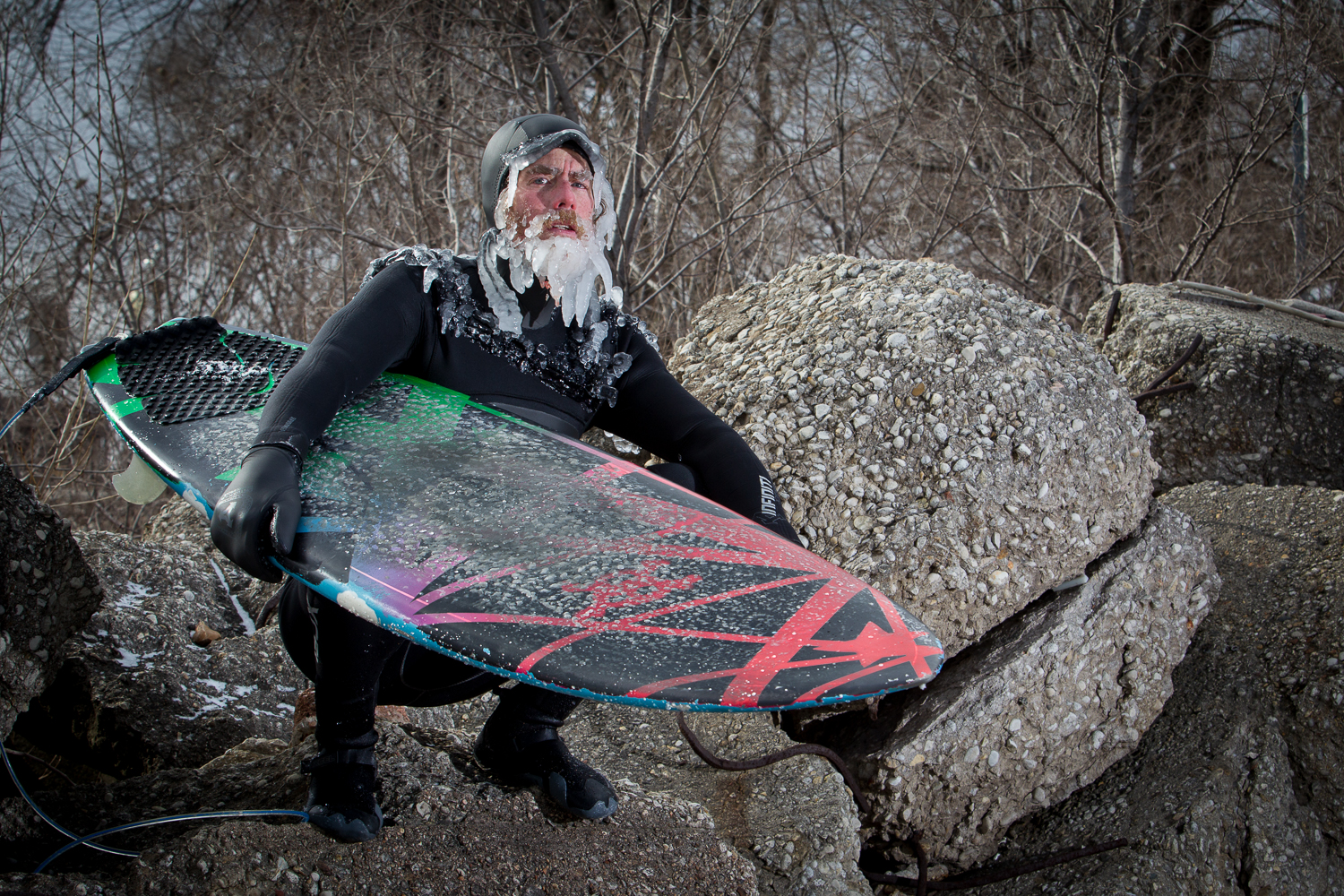 I’ve known this dude for a long time. He suffered through it because he knows my work and trusts me. I would’ve loved to have spent another half hour with him, but this had to be real quick because we were freezing. Wetsuits don’t work that well out of the water.

He’s warming up in the car a little bit, but I warned him, ‘Don’t warm up too much, I don’t want your beard to melt.’ I’m out there trying to get my flashes set up. Get my exposure right. I call him back out. 15 shots. Less than 5 minutes. And he was still complaining.

Before that shot, everybody else is already done surfing; they’re in their heated cars having a beer, heater on high. You know, just relaxing.

But I’m dragging my gear out, begging people to hold flashes for me, pleading with this dude to stay out in the cold and smile.

A lot of times I’d rather surf. So it comes down to this: ‘Do I wanna keep playing?’ or ‘Do I wanna tell the story?’

I don’t shoot surfing as much as I wish I could. You can’t surf every day on the lakes. So when there’s surf, I just wanna surf. 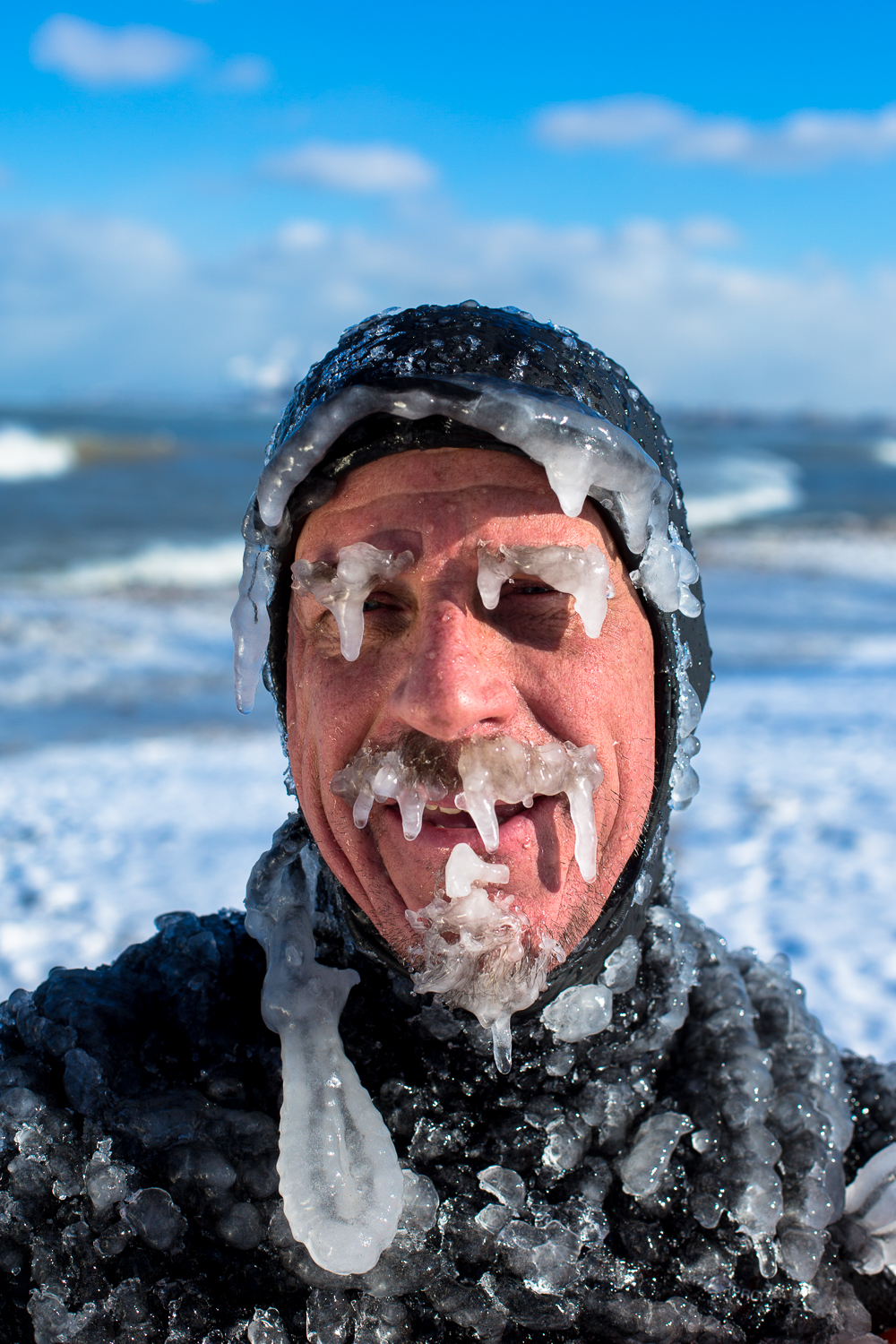 It all depends on what’s in my head. A big thing that I do, though, is shallower depth of field. I shoot at 2.8 way too much. If you look at my photos, the majority are probably at 2.8. I want the subject to pop.

One other big thing is a sense of place. I go down to the basics: foreground, middleground, background. When I see people showing a surf photo on Facebook or whatever, it’s just the surfer in the water. You have no idea where it is. It could be anywhere.

It’s all about storytelling within a context. You can just look at an image, or you can involve yourself in the image. You want someone to interact with the photo. Ya know—daydream about it.

On Gear In Extreme Conditions:

Sounds like you’ve had to learn some things the hard way.

If it’s super extreme, which I haven’t done in a long time, a Ziploc bag helps a lot. The condensation is usually on the outside of the Ziploc. I don’t know about the science, but that’s how it works.

Bottom line: if you have more passion than everyone else, you will make it.

Another good cheat is hand warmers, those little chemical heat packs. Put them around your lens and put tape around it. I’ll throw a couple in my bag, too, beside the batteries. If the camera bag is in the back of my car, I’ll get it out and leave it on the ground for a little bit before I open it up to let my gear slowly acclimate.

It took a long time to learn my lesson. I was doing a shoot for a big yacht company—it was for this big millionaire.

This guy was a dick.

So I explained, ‘Well, on the phone and in the email we sent you, we told you it was going to be a couple of hours to go out on your boat.’

‘Oh no! We’re not taking my boat off this dock. Are you gonna pay for gas?’

So I had to scramble to salvage something. I was in the air conditioning, in a rush, took my camera out of the bag, went to go shoot, and instantly the lens fogged up.

So I’m constantly with the lens cloth—just rub rub rub, get a shot, rub rub rub, get a quick shot. I got something for the client, but barely. I had to figure out a solution to the problem. A professional can’t give excuses about why he didn’t get the shot.

The only thing that matters is results.

On Exactly When To Pull Out Your Camera And Shoot:

I do my best work when it’s hard and uncomfortable to shoot. And that’s when you need to be doing it. 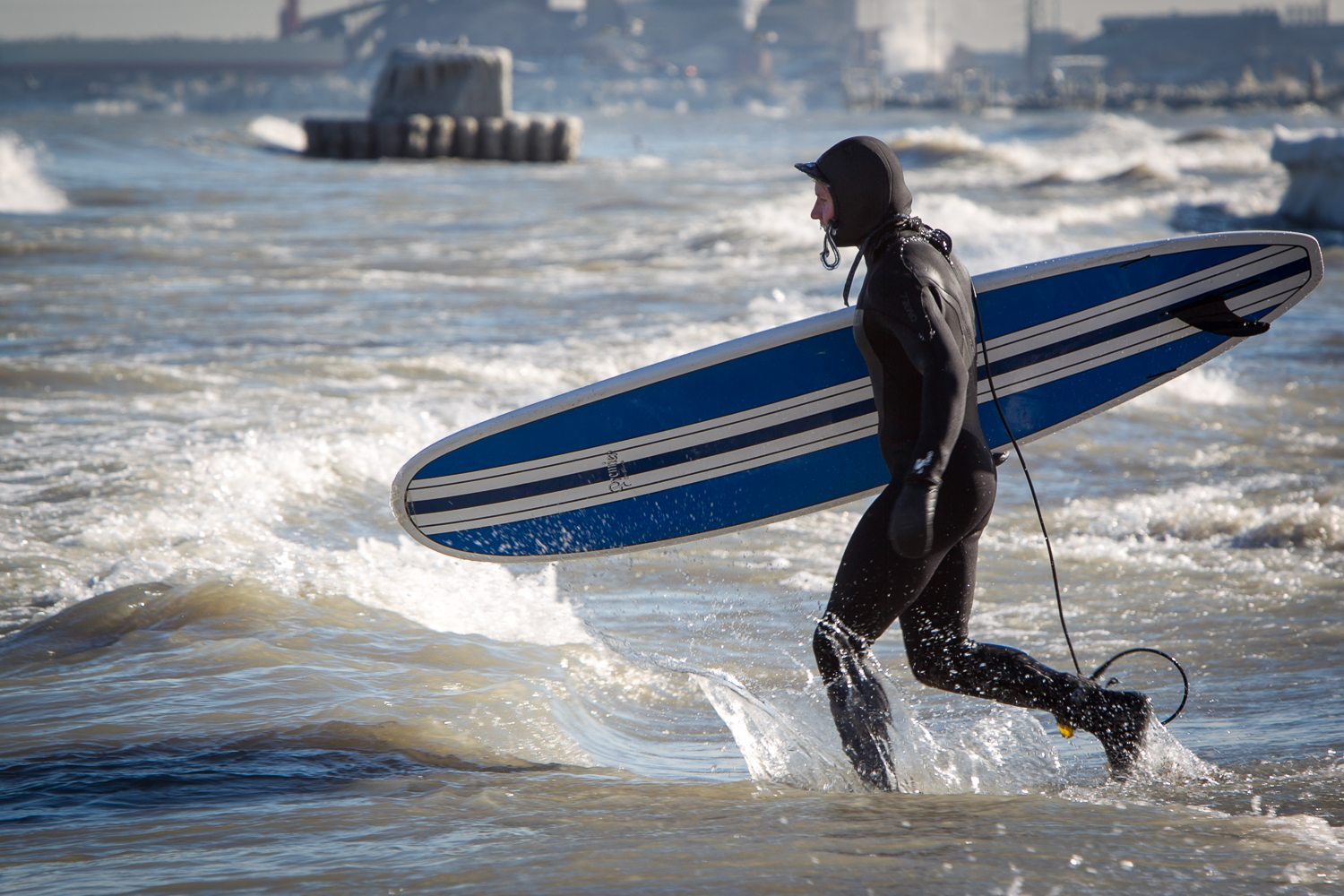 There are a lot of times when I wish I would’ve shot. The times you don’t want to shoot, and you feel uncomfortable, especially for an adventure or an action story, are when your camera should be out.

Almost all my favorite photos are the ones I almost hated taking while I was there. If you’ve ever shot on location for a client, you know that location shoots are some of the hardest and most uncomfortable shoots to do.

During some of my favorite shoots in South Africa or the Amazon, I remember thinking at one point, “This completely f*#@! sucks, I wanna be home.” But I forced myself to capture the story, even though it would’ve been real easy to climb into my tent and hide. Those shots ended up being some of my favorites.

On How To Make It In The World Of Photography:

I don’t follow this advice as much as I tell it to people, but if you shoot what you love, it will definitely come through. In fact, you don’t even have to be a great photographer. You just have to be able to tell a good story.

Bottom line: if you have more passion than everyone else, you will make it.